I like everything about cooking wild game. I also like to think I’m fairly creative with wild things we bring back from the woods. But unless you’re plugged into other people with a passion for wild food, someone with a fresh approach that keeps it fun, you tend to fall back on the familiar — squirrel baked in cream sauce, fried fish fillets, and deerburgers. All those are good eating, but I was inspired last week to elevate my game.

What re-pumped my passion was an email invitation to be part of a virtual cooking experience hosted online by Scott Leysath, widely known as the The Sporting Chef. Leysath, of Sacramento, California, has been cooking fish and game on television for years, and he hosts both “The Sporting Chef,” and “Dead Meat” on the Sportsman and Outdoor channels. Dead Meat travels the country discovering fascinating outdoor people who are not famous but have fun catching, killing, or trapping wild critters that aren’t exactly every-day food, then cooking them in creative ways. Recent shows featured invasive lionfish and iguana in Florida, beaver in Missouri, and Michigan bullfrogs. Leysath also produces “Fishmonger” on Outdoor Channel, about the lifestyles of America’s commercial fishermen. If that doesn’t keep him busy, he’s also been the cooking columnist for Ducks Unlimited Magazine since 2007.

Leysath is not a trendy “foodie.” He’s easy to be around, which comes across even on-screen, and he dubs his style “short attention span cooking,” throwing fish and game into a skillet with blazing speed. Here’s a quote from Scott that tells you what he’s about: “Recipes that are simple to prepare, don’t require a long list of obscure ingredients and, most important, taste really good will be in use long after herbal foams have evaporated. Molecular gastronomy is interesting, but I’d rather go fishing.”

The Sporting Chef team arranged for Paula and Steve Piatt, prolific writers on the outdoors from Sayre, Pennsylvania, to cook “with us.” Scott encouraged us to invite family or friends to join the experience. My daughter Colleen is an ambitious cook with a creative approach. She accepted and we had a team for our corner of the screen.

Scott told Paula, Steve, and I to be on the watch for food deliveries in coming days, fare that would be more familiar than iguana or beaver, but I wasn’t prepared for the breadth of this menu. We got a huge box from MacFarlane Pheasants of Wisconsin, America’s largest producer of ring-necked pheasants for the table and the shooting field. The box held whole cleaned pheasant, pheasant breasts, pheasant bratwurst, pheasant sticks (think Slim Jims), and pheasant summer sausage.

Another box held two beautiful backstraps of venison, so large I had to freeze one for later. When I complimented Scott on their quality, he told me they were from a farmed red deer from New Zealand. What are the chances I would have ever eaten red deer otherwise?

Next came a box of frozen whole quail, ready to thaw and cook. A mix-up occurred with the vegetable delivery, but when I told Scott we had tomatoes falling off the vines in the garden because we couldn’t eat them fast enough, he got pumped. “Garden tomatoes, so much better,” he cooed.

We all clicked on the common link and faces appeared across the screen, from across the country. Colleen had prepped everything ahead, from flaking the fish to dicing jalapeno. I would have gotten overwhelmed without her. My wife Kathy, Colleen’s partner Rich, and our five-year-old granddaughter Safari sat waiting (Safari munching on the pheasant sticks). Their role was to eat what the virtual chefs prepared.

First, with Leysath coaching us, we made fish cakes seasoned with cilantro and jalapeno, each with a butterflied shrimp tucked inside. The cakes were Kathy’s favorite dish of the evening, and she, by her admission, is not a “fish girl.”

Next came Safari’s favorite — breast of pheasant stuffed with pheasant sausage, then pan-seared and finished with tomato and basil. Safari graded it, “One hundred and fifteen thumbs up!” She is just learning about such big numbers. Scott enjoyed my stories about hunting wild pheasants around here in my youth.

I thought the most novel dish was the pan-roasted whole quail with citrus-cilantro vinaigrette. I told those assembled on-screen that I remembered wild quail calling around home in Lemont Furnace, but I’d never eaten one. The meat was succulent, and the acid from the dressing favored its richness. The whole birds were a treat to the eye, and the tongue. All of us held our pans of browned quail up to the screen for Scott’s approval, and one another’s applause.

Last among the entrees was the best, and reminded me of the Wedding Feast at Cana, where Christ turned water into the best wine of the evening after the hosts’ wine jars had run dry. It was the venison backstrap, cut into thick butterflied steaks, then seared rare at Scott’s insistence, in hot cast-iron with rosemary and garlic. “If there’s anything you take away from this evening, it’s this,” he declared. “Do not cook venison steak beyond, at most, and if you must, medium-rare.”

While the meat rested, we all made a sauce from fresh blackberries and plum jelly, ladled over the hot, rare steak. The flavor balanced the rich earthiness of deer meat against the sweet tang of fruit. My only disappointment of the evening was that my appetite was sated by the time we served the deer steaks. Fortunately, I still have the recipe.

You can watch all new episodes of Leysath’s cooking shows, and more, on the Sportsman and Outdoor channels in 2022. The networks launched a menu of wild cuisine fare during their “Fall Premiere Week” Sept. 20-25 including Man Eats Wild, MeatEater, and Farming the Wild.

Then all you need to do is bring something home from the woods.

Never Put This One Food Item on the Top Shelf of Your Fridge, CDC Says

Sun Oct 3 , 2021
The key to a healthy diet is eating a wide range of foods, including fruits, vegetables, grains, meat, and more. But experts say that another key to your good health is separating those foods safely, so they don’t contaminate one another and harbor harmful bacteria. In fact, according to the […] 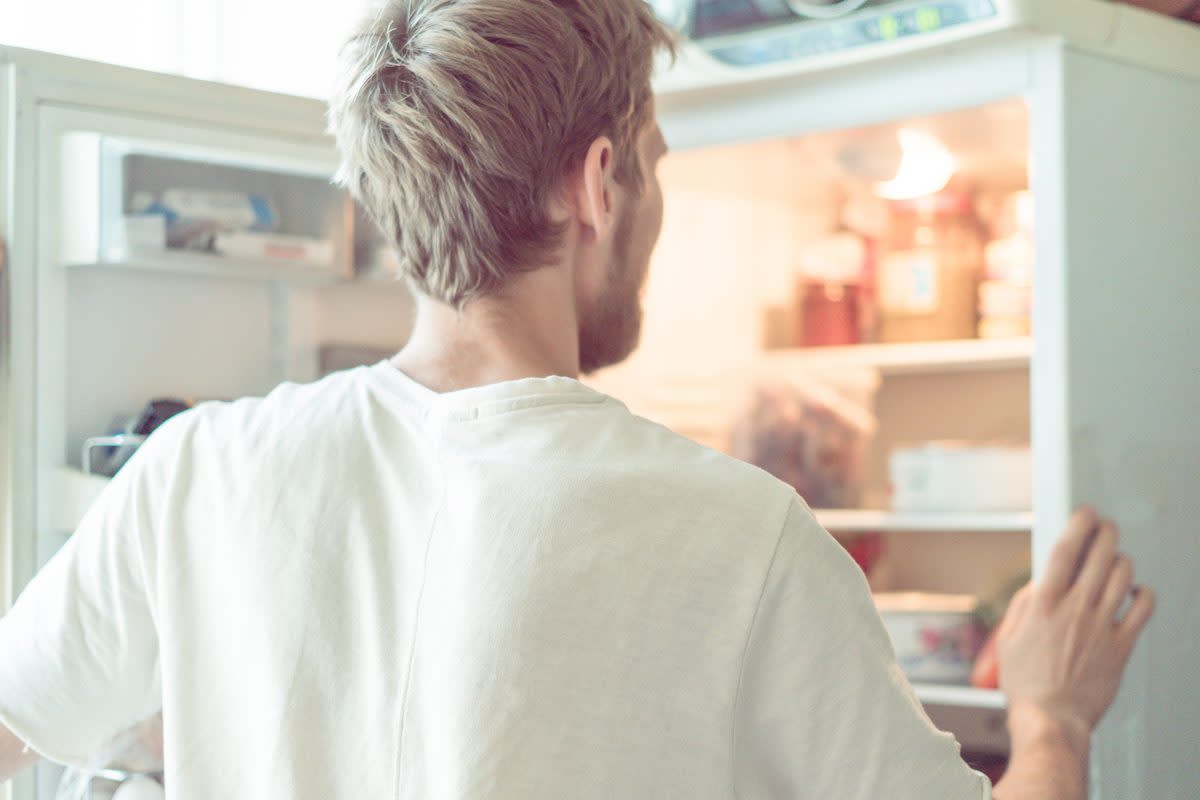