For me, June always signaled the last day of school and thus, pure and unadulterated freedom. The “Hallelujah” chorus sang in my mind as I ran out the front doors of my elementary school and into the arms of my parents, who were waiting to pick me and my sister up for a celebratory dinner. Our summer reading list was clutched in my hands—the requirements are now lost on me some 15 to 20 years later, but the idea was that you had to read at least part of the list, circulating through a few different genres, and report back on them to your new teacher the following year.

Now that school’s (almost) out for summer in most parts of the country, we’re commencing the best weeks of the year with a more grown-up reading list: the essential barbecue cookbooks to study while your smoker is working its magic. For hot and sunny days, start your smoker at twilight and by dinner the next day, you’ll be feasting on succulent smoked meats.

1. Rodney Scott’s World of BBQ: Every Day Is a Good Day

Rodney Scott’s BBQ is a staple joint in Charleston, South Carolina serving whole hog barbecue made with his family’s recipes that have been passed down for generations. Oh, and Scott is the first Black pitmaster to win a James Beard Award (he was named best chef in the Southeast in 2018). In 2021, he published this cookbook that spills the saucy secrets behind his booming barbecue business.

“Some of the rowdiest food fights in the United States involve barbecue. Claims of territory, boundary drawing, and quasi-religious testifying break out over slow-cooked meats,” writes Elizabeth Engelhardt, who is the John Shelton Reed Distinguished Professor of Southern Studies at UNC Chapel Hill. This isn’t so much a cookbook as it is a history of barbecue in the U.S. Republic of Barbecue relies on first-person accounts from pitmasters, butchers, sausage makers, and forest managers to tell the deep history of the deep south’s essential cuisine.

Aaron Franklin rose to the pinnacle of barbecue fame about 10 years ago in Austin, Texas where he opened his now-acclaimed barbecue restaurant. Franklin has since become known for its brisket—if you can’t make the trip to the Lone Star State, you can order it via Goldbelly. Or, you can follow his tips and tricks for smoking your own brisket, ribs, turkey, and more.

4. Meathead: The Science of Great Barbecue and Grilling

This New York Times bestseller from Meathead Goldwyn demystifies dry and wet brining; explains why you should always, always use a meat thermometer; how to use a smoker; and other essential tidbits for delicious barbecue. It goes beyond barbecue though with insightful lessons that will serve you in the kitchen no matter what you’re cooking.

5. Whole Hog BBQ: The Gospel of Carolina Barbecue with Recipes

Daniel Vaughn not only shares my last name (okay–it’s one letter off), but he also has my dream job; in his career as a barbecue editor (yes, a real title!) and author, he has tried nearly 2,000 barbecue joints, most of which happen to be in Texas. This barbecue cookbook spotlights one of the most notable barbecue traditions—Carolina-style chopped pork.

6. The Prophets of Smoked Meat: A Journey Through Texas Barbecue

Another award-winner from Vaughn, this is the first barbecue cookbook I ever picked up (right after college when I almost worked in a barbecue food truck—a failed pipe dream I regret to this day). I might be a little biased, but it really is my favorite guide to Texas barbecue.

Featuring a step-by-step guide to smoking meats and more than 100 recipes, this “bible” from Steven Raichlen is part of the author’s barbecue series, which also includes extremely fun titles like Project Fire and The Barbecue! Bible.

Tell us: what’s your go-to barbecue cookbook! Let us know in the comments below 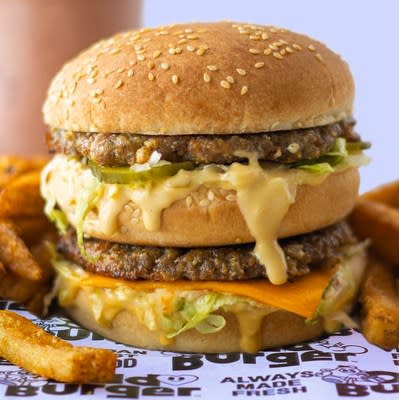