If you’re looking for your next hands-off, delicious one pot dinner, this is it: Hainanese chicken.

Have you ever had Hainanese chicken rice before? Are you as obsessed with it as I am? I’m guessing the answer is no because I have a lifelong, deep obsession with chicken rice.

It’s my ultimate comfort food, my all-time-favorite go to meal, my version of Anton Ego’s mom’s ratatouille. You know, the scene in in the Pixar movie where Anton is taken back to his mom’s kitchen and she serves him ratatouille and all is right with the world. That’s Hainanese chicken rice for me. 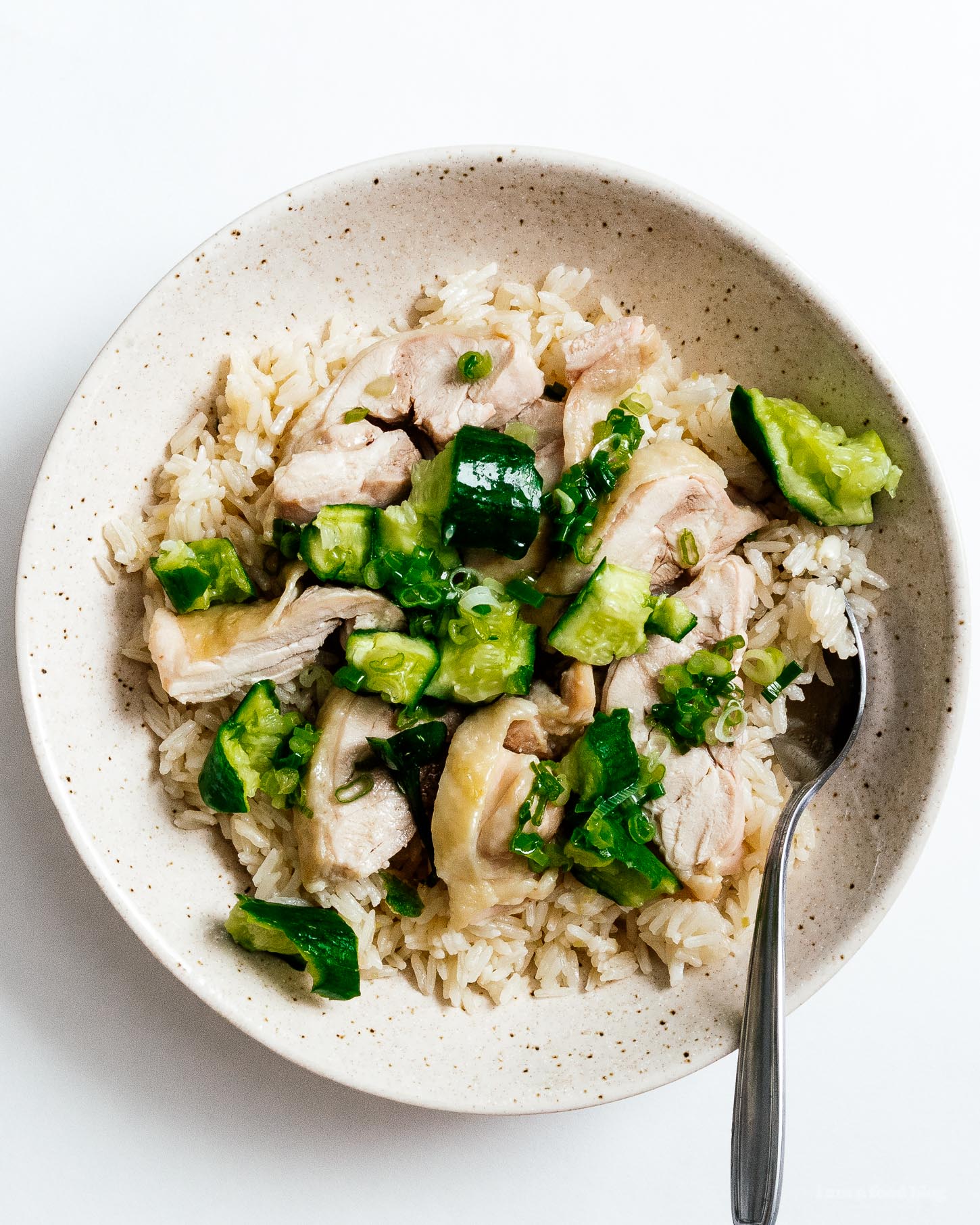 All cultures have some sort of chicken and rice. The Japanese have oyakodon, Latin Americans have arroz con pollo, and Southeast Asians (and Hainanese people) have Hainanese chicken rice. Like most chicken and rice dishes, it’s simple at heart: poached chicken and seasoned rice served with a variety of sauces.

Like lots of immigrant adapted foods, there are actually a bunch of different types of Hainanese chicken rices: Singaporean, Malaysian, Vietnamese, and Thai. Growing up, it was a staple in our house. Chicken rice is the food that can bring me back to my childhood and transport me to some of my favorite memories as an adult. I’m not embarrassed to say that chicken rice is my everything.

What is Hainanese chicken rice?

Hainanese chicken is deceptively simple but somehow complex. It originated in Hainan in Southern China, but its spiritual home is Singapore, where you’ll find renditions of the ever popular dish everywhere, from hawker stands to high end hotels.

The chicken is poached in a simple yet flavorful broth scented with ginger, garlic, and scallions and is silky, firm, and tastes like the most perfect chicken you’ll ever have. The rice that comes with it should stand on its own: full of chicken flavor, slicked with fat, savory, and fragrant. 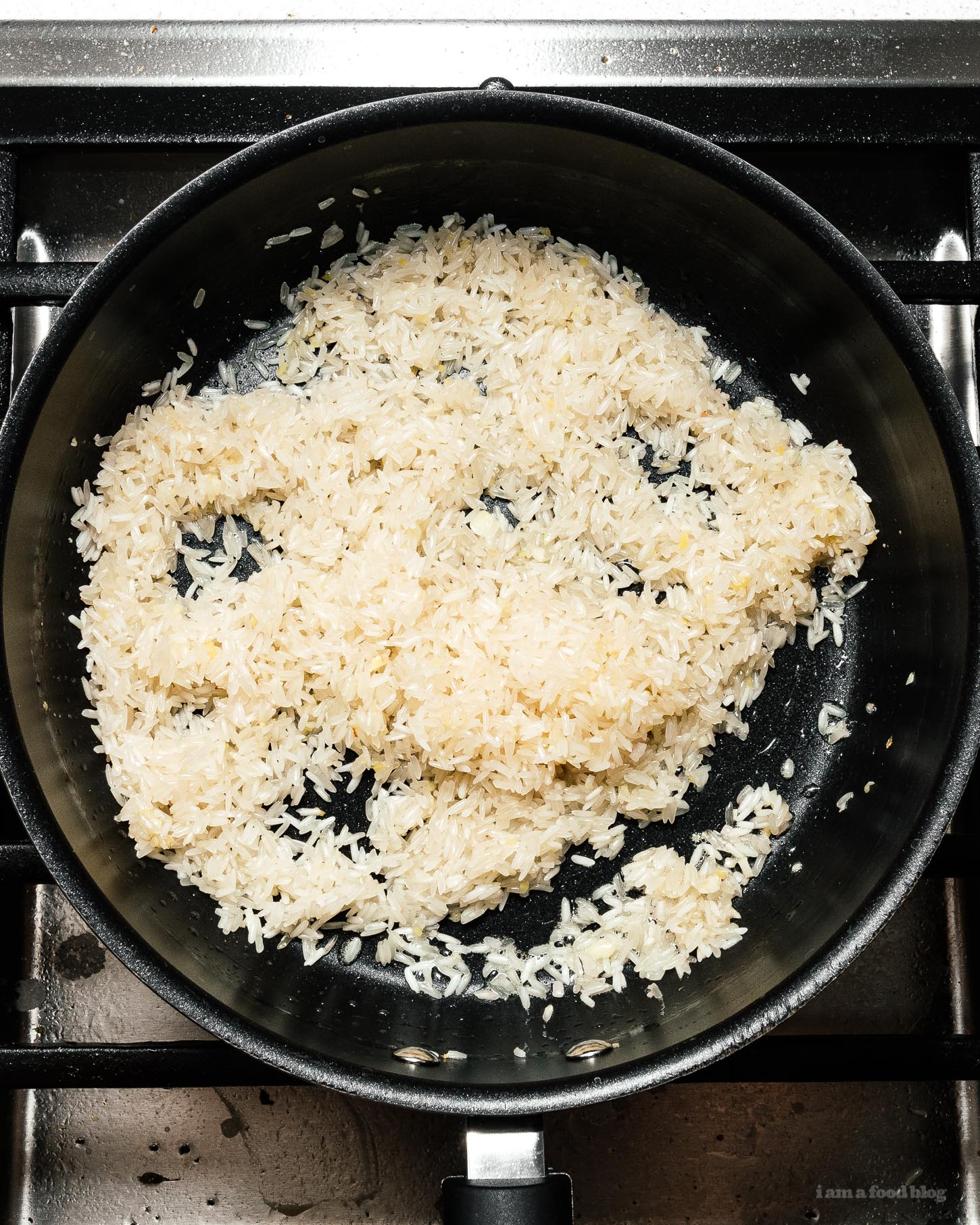 What’s so special about the rice?

You’ve got to taste it to believe it, but I think the secret to why Hainanese chicken rice is so good is the rice. And the secret to the rice is chicken fat. Any good cook knows that when you cook rice in broth, the broth infuses the inside of the grain, giving it extra flavor. A lot of cultures do this, like how Mexican rice is cooked in tomatoes and onions. Chicken rice goes one step further by frying uncooked rice in chicken fat with garlic, shallots, and ginger before cooking in chicken broth, giving the rice another layer of toasty, aromatic deliciousness. The rice should be glossy, luscious and full of flavor.

The best chicken rice is the one you like making

There are a lot of Hainanese chicken rice recipes that call for 24 hour (or more) cures and other very complicated steps. It doesn’t need to be this way, especially if you just want good chicken rice and you’re not competing with a dozen other chicken rice hawkers at a market. It’s the rice that you need to pay careful attention to, and that’s an easy thing that doesn’t take much extra time.

Personally, I love making chicken rice, I find it therapeutic somehow. But sometimes I just want to eat chicken and rice without cooking a whole chicken. This easy recipe is for those times: skin-on boneless chicken thighs and rice are cooked in one pot for ease and fewer dishes to wash. Win-win! 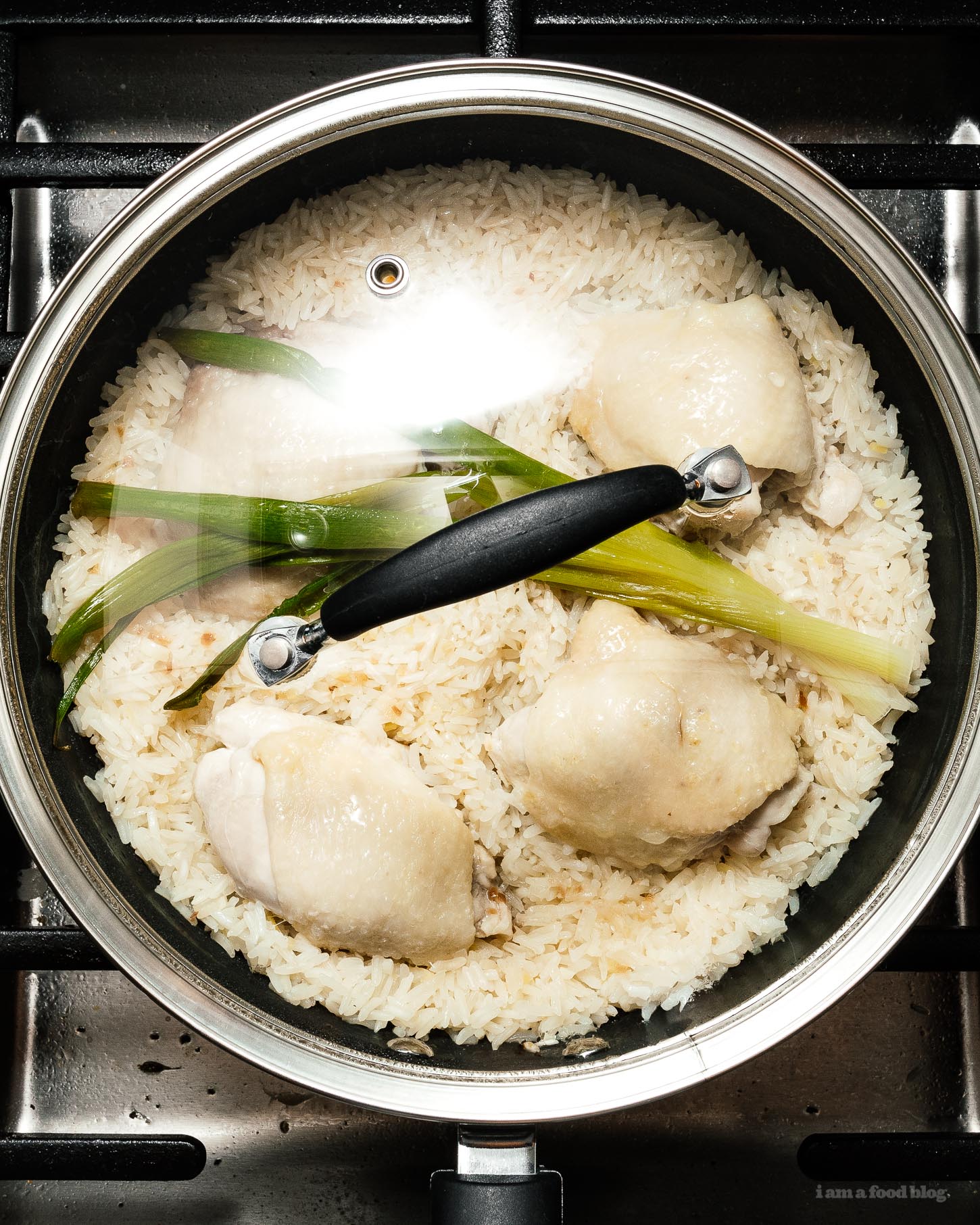 Chicken fat is what makes the rice part of chicken rice taste so good. But, if you don’t have any chicken fat, don’t worry, toasting your rice in any fat is going to give it a glossy, delicious flavor coat. The key is cooking the ginger, garlic, and shallots in fat so that the aromatics release their deliciousness into the rice. 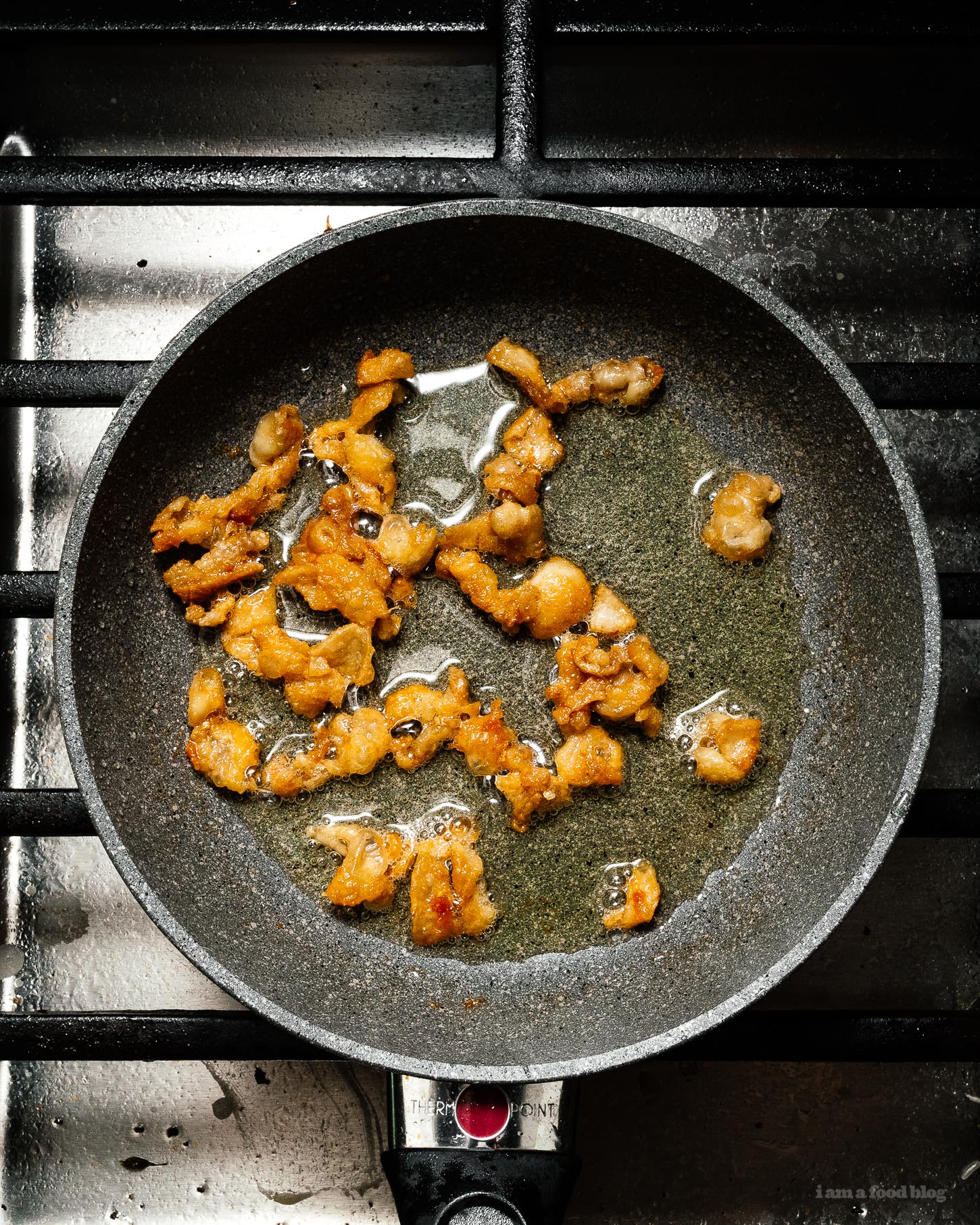 How to render chicken fat

Chicken fat is the key to a good Hainanese chicken rice. The chicken fat adds so much flavor to the rice, you won’t believe it. 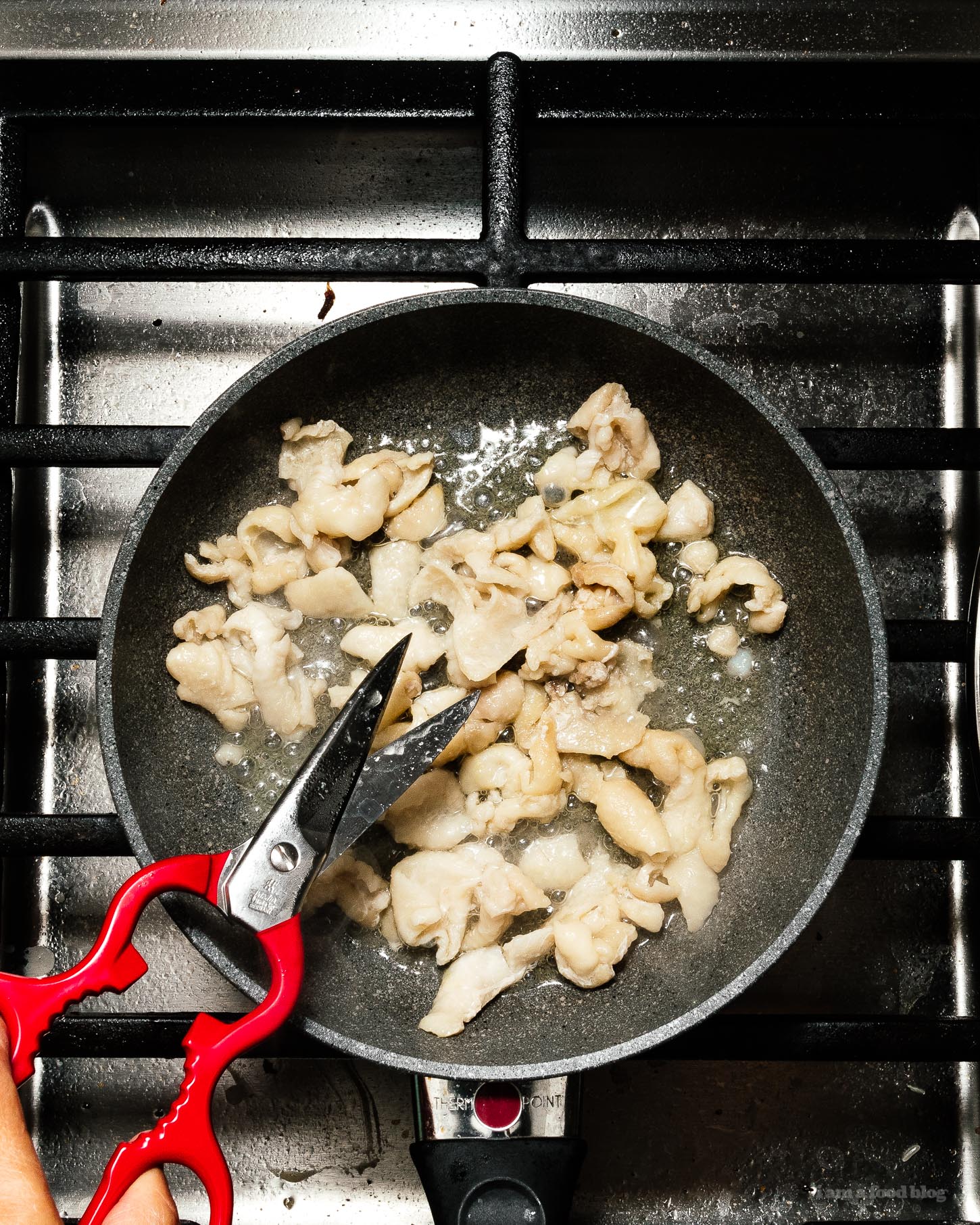 But what about the chicken? Do you need a whole chicken? Should you use dark meat or light if you’re just going with individual pieces? Again, this is personal preference, but I think the whole chicken isn’t necessary. The only question is, do you go with thigh or breast?

When you’re in Singapore, you have to pay extra for dark meat (thighs and drumsticks) because the meat is silkier and more tender. I definitely prefer thighs to chicken breasts when making chicken rice but sometimes I like the texture of breasts too.

What kind of chicken for chicken rice?

Chicken thighs are clearly superior but they don’t tend to sell skin-on boneless chicken thighs. What I do is buy bone in skin on thighs and trim the bones out myself.

How to debone chicken thighs

There’s only one bone to remove from a chicken thigh, making it super simple.

You can use the bones to make a simple chicken stock that will add EVEN more flavor to your Hainanese chicken rice. See below for the recipe.

How do you eat Hainanese chicken rice?

Everyone eats it differently! Some people like to pour all three sauces on top and mix it all up, some people only use certain sauces, really, it’s up to you. Authentically, like with curry rice, it’s usually served on a plate with a spoon and fork – NOT a bowl and chopsticks – to scoop everything up. 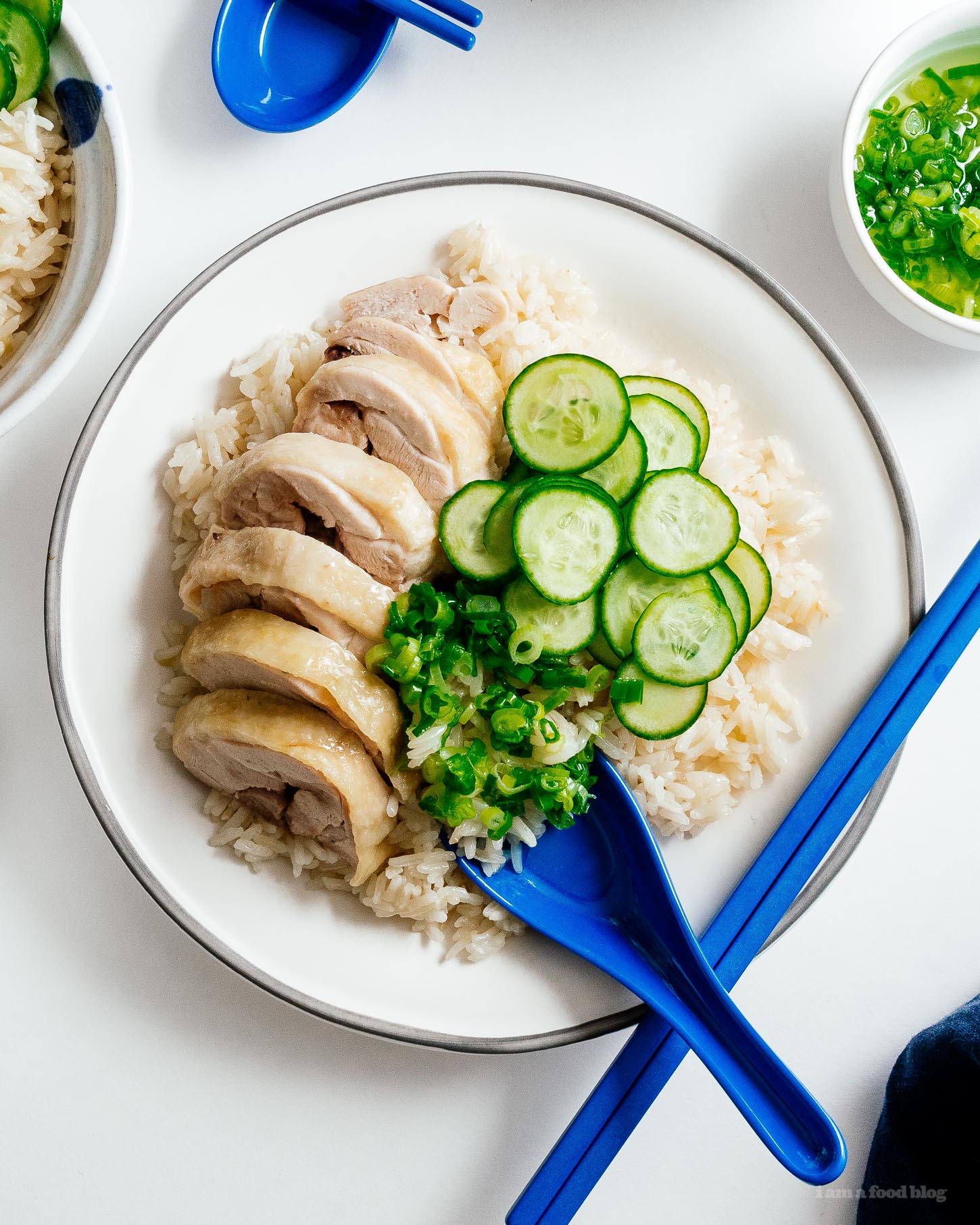 What to serve with Hainanese chicken rice

Traditionally it’s served with the poaching broth the chicken was cooked in, as well as chili sauce, scallion-ginger sauce (I kept it simple here with a scallion only sauce), and dark soy sauce. If you’re in Singapore, they’ll probably give you a couple pieces of cucumber, and a sprig of cilantro on top.

Sometimes I keep it simple with a pure scallion oil, but if you have the time to chop up some more aromatics, a ginger garlic scallion oil is an unforgettable umami bomb you’ll want to put on EVERYTHING.

This is different from the scallion oil and I make it when I want a pure ginger taste. It’s not too spicy because cooking the ginger mellows it out. It’s a perfect “clean” tasting sauce for those Hainanese chicken rice purists out there.

Here are some of my tips for making chicken rice. I do it so much that it’s pretty much second nature to me!

Use a food processor

I like doing prep work but a food processor makes everything easier and more enjoyable. There are a lot of aromatics in Hainanese chicken rice and it’s the aromatics that make everything taste amazing so you don’t want to skip out. A food processor will cut your prep time in half. This is the mini one we use on the regular.

Save your chicken fat!

I have a little freezer bag of frozen chicken fat/skin in the freezer. This is probably not that strange to people who know how amazing chicken fat is. I add to it whenever I’m trimming chicken or if I need skinless chicken in a recipe. Skin on chicken is so much cheaper that skin-off so I just de-skin at home and happily add to my stash. When the bag is full, I render the fat, stash it in the fridge in clean jar and scoop it out to use whenever I have a chicken rice craving. The crispy chicken skins get eaten pretty much right away. Having a stash of chicken fat in the fridge means you’re never too far away from chicken rice.

Make it in the rice cooker

If you’re not a fan of cooking rice on the stove you can still make this one pot chicken and rice:

I prefer to use boneless chicken for this quick and easy version because boneless thighs finish at the same time as the rice, making this quick and easy. If you want to use bone in chicken, make sure the chicken is tempered (not straight from the fridge) when you’re adding it to the pan. Cook the chicken and rice for 5 more minutes and let it steam with the lid on for an extra 5 minutes as well. The rice will be on the more tender side.

Something people really love about Hainanese chicken is the super silky smooth chicken skin. It’s delicate, tender, and delicious. In Singapore, if the chicken is gelatinous and silky, it’s considered perfect. The secret to super silky chicken skin is a combination of salt scrubbing and temperature control. Because we’re making a one pot Hainanese chicken I’m going to talk mostly about salt scrubbing, but I will lightly touch on the importance of an ice bath too.

The first thing you should do, if you’re looking for super smooth skin is to give your chicken a nice salt rub. Sprinkle on a generous amount of coarse salt and exfoliate the heck out of the chicken skin, making sure that the salt gets into every nook and cranny of the skin. After exfoliating, rinse the excess salt off the skin (so the chicken doesn’t end up too salty) and the chicken skin should look tighter, cleaner, and generally very pretty. This works super well on whole chickens but it also works on cut pieces of chicken to. Do it, it will definitely make a difference.

As for the other key aspect of silky skin, it’s temperature control. This recipe is for a super simple Hainanese one pot chicken and rice but when you’re making it traditionally (as I do quite a lot as well) you using a whole chicken and poach it gently. After scrubbing and exfoliating with salt, the chicken is gently submerged in a pot of just simmering water and aromatics (scallions, ginger, garlic, shallots) until it cooks through. Immediately afterwards, the chicken is put into an ice cold water bath. The hot then cold shocks the chicken skin, pulling it tighter against it’s body. The skin will be silky and perfect!

When chicken rice is done well, you almost don’t need the chicken! Mike pretty much just eats giant bowls of the rice with no chicken at all, that’s how good it is. I hope you give this recipe a try, it’s the perfect comfort food for chilly fall days. 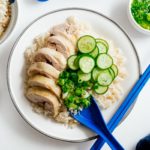 * Percent Daily Values are based on a 2000 calorie diet.

Thu Jun 2 , 2022
[ad_1] Elote Quinoa Salad made with velvety peppers confit, juicy sweet corn, homemade dressing, cotija cheese, lime, and spices. Perfect for summer and so, so good! That’s it! Summer is on its waaaaay! And just in time for this bright, nutty, totally satisfying, creamy dream salad. It packs a real […]